Of giant aldabra tortoises, world’s most photographed beach and cycling around a quaint little town.

If you haven’t read part 1 yet, now would be a good time to check it out here.

Welcome to Part 2 of my Seychelles series!

After spending 2 days lazing around the beaches of Praslin, we hopped onto a boat and took a day trip to another, slightly smaller island of Seychelles called La Digue. Situated at only a 15 minute ferry ride from Praslin, this tiny island feels like a town straight out of an English novel. Lush green walkways, cute and cosy houses, chickens roaming around in their front yards – know what I am talking about? You might even spot an Ox cart here and there as there are no cars on this island (except for a truck or two being used for developmental purposes). People go about their business on bicycles. You’ll find native kids running around here and there and a couple of tourists (actually many tourists) exploring around on their rented cycles.

Tricycle for me and (if you can see in the background) bicycle for him.

As soon as we arrived at the port, we met several men offering to rent us a bike and we followed one to his shop. A normal bicycle on La Digue would cost you around SCR 150-200 (USD 11-15) per day. I have never ridden a bicycle in my childhood, maybe only once and that too with training wheels so naturally I don’t know how to balance myself on it :p So to compensate for my jahaalat, we got me a tricycle :p Later on, it turned out quite heavy duty and I had a lot of trouble riding it uphill as obviously you need to put in more effort to paddle its heavy body. My husband, however, had a good time riding his bike and watching me struggle with mine. I think he also made a couple of funny videos of me struggling which I hope never see the face of earth ever! 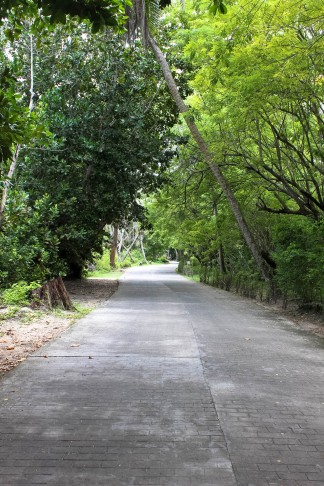 Such beautiful paths to cycle on. (La Digue Island, Seychelles)

Made friends with Doge.

Completely clueless as to where we should go, we spent a few hours cycling through the quaint streets and into the forest in the hopes of finding a nice beach to end up at. We started navigating towards Anse Source d’ Argent beach which we heard is one of the most photographed beaches in the entire WORLD due to its beautiful granitic rock formations. After a couple of wrong turns, we ended up going uphill and ended up at another beach. I think it was the Grand Anse Beach completely on the opposite side to where we were intending to go.

Stupid people don’t read signs. They randomly snap a photo of the said sign board, ignore the fact that they had to go to La Passe and instead take the turn to Grand Anse 😀 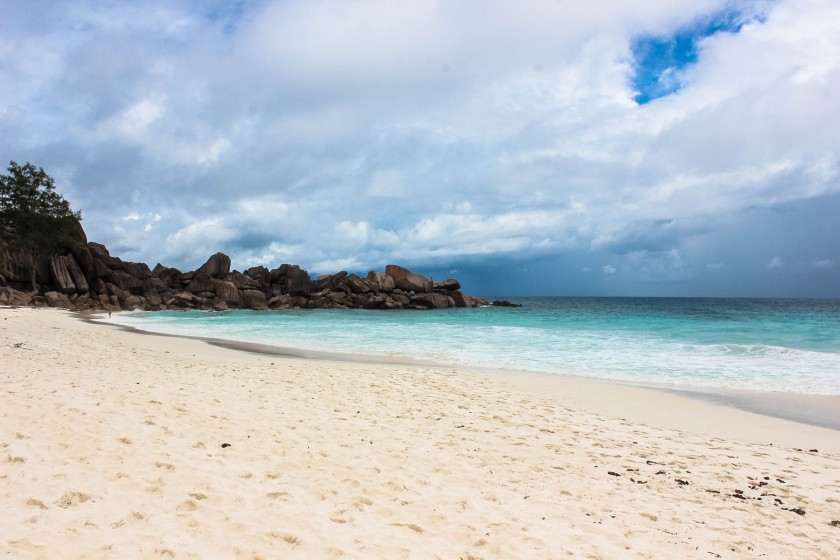 Stupid people eventually end up at Grand Anse beach (equally pretty and photogenic. Internet, Y U NO say more about this place?)

The sky was slightly overcast, so we spent a good time at this beach. However, the tide was not good for swimming here. Very rough. Soon we hit the road again to cycle towards Anse Source d’ Argent and found out that had we taken the right route, we would have totally avoided the struggles of uphill cycling.

But the struggle was worth it. The beach really is one of the world’s most beautiful beaches! 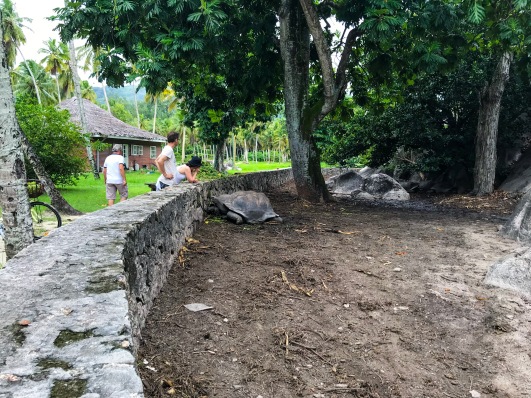 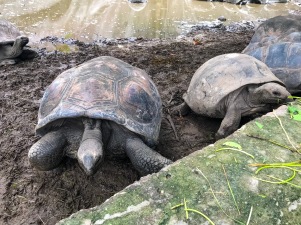 So to reach the beach, you enter this park sort of thing called La Union where security will stop you and you will have to pay SCR 100 per person entry fee. From there you follow the signs to the beach, meet some giant aldabra tortoise along the way, and once you reach there, you can park your cycles under the trees close to Lanbousir Restaurant. 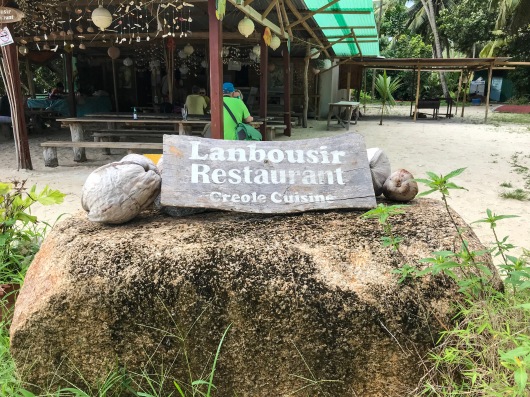 From there you have to walk through a trail for around 8-10 minutes to reach the main beach area. Along the way, the pathway is so picture perfect honestly. It’s like you’ll be walking in the middle of these huge rock formations and just over the rocks you can almost hear the sound of beach waves. It’s amazing. 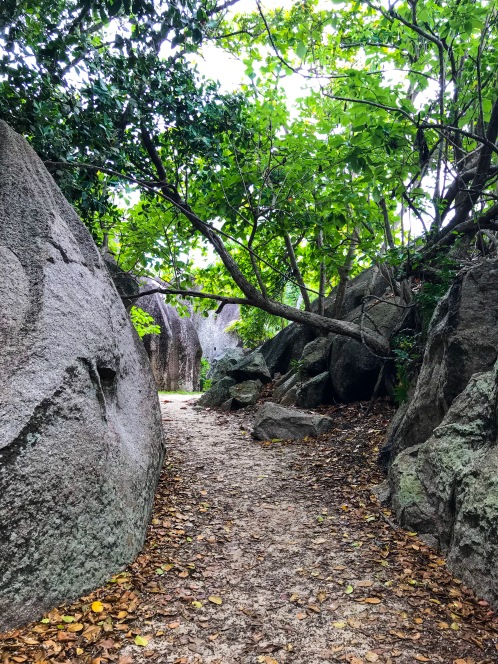 While walking to Anse Source d’ Argent, (La Digue Island, Seychelles). Huge rock formation on either side of the path.

Once you reach the beach, make sure to take a hundred photographs from all angles possibles (lol) ’cause it is heavenly! I’ll let the following pictures do the talking. 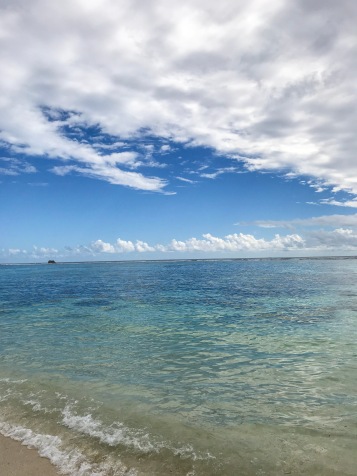 Yeh koi uncle shoda pana kar rahay thay while I was talking the pictures of the view. Huh!

There’s also a bar at the beach from where you can buy drinks and coconut water. Lanbousir Restaurant is also a fine place for some quick lunch. We had their Fish n Chips and it was normal. Not too bad and not too good. Plus, we didn’t have any other choice ’cause halal food problems, bro. Side note: My husband hates fish so as a natural reaction he hated the food there. Very feet-in-the-sand kind of place. Nice ambience though.

We spent a really nice time at the beach. The rocks are a beauty truly. Afterwards we headed back to the ferry harbour as we had to catch a boat back to Praslin at 5 PM.

Some word of advice:

If you think you’d like to spend more time in La Digue, by all means do so. There are some lodges and self-catering houses available there. Initially we were planning to spend a night there but decided against it because I did not want to go through the hassle of packing and unpacking our luggage again and again. We had to head out back to Mahe the next day so it would have been a rushed exercise for us. So we agreed upon just going to La Digue for a day trip only. Had we stayed another day, we could have explored the other half of the island too, but still no regrets. We were quite happy with what we got to see.

Hope you enjoyed. Soon I will take you around Mahe – the largest island of Seychelles 🙂 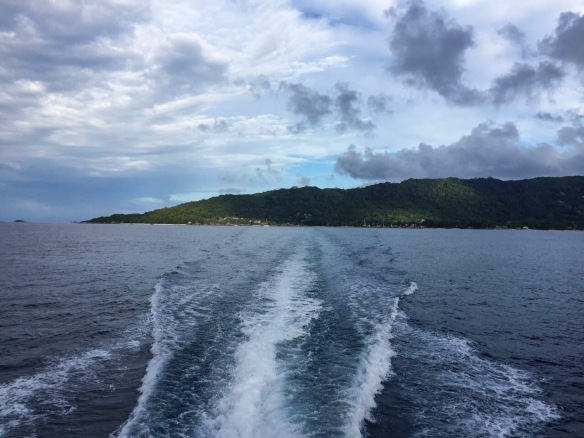 P.S. You can book your ferry to La Digue if you’re coming from Praslin at the Praslin Ferry Harbour the same day (depending on seat availability) or prior to arrival to ensure you get a seat. If you wish to book online, you can do so here. If you are coming from Mahe directly, you need to book at Cat Cocos.