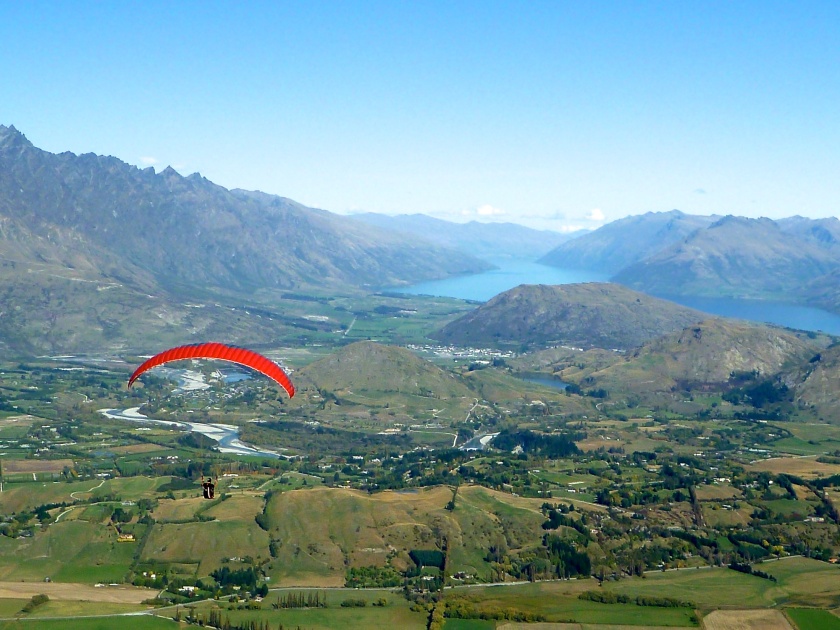 If you’ve been following my Nepal travelogues, you must be aware of the fact that I planned this trip to be a bit of both relaxation and adventure. I’ve already blogged about my ziplining experience in Pokhara, but I also went paragliding there so this post will be just about that 🙂

For those who don’t know, Pokhara is the second largest city of Nepal after Kathmandu. It’s the tourism capital too, which means that it is bustling with tourists all year round and has lots of fun stuff to do there if you are visiting. I did a post earlier about what you can do in Pokhara. Check it out. 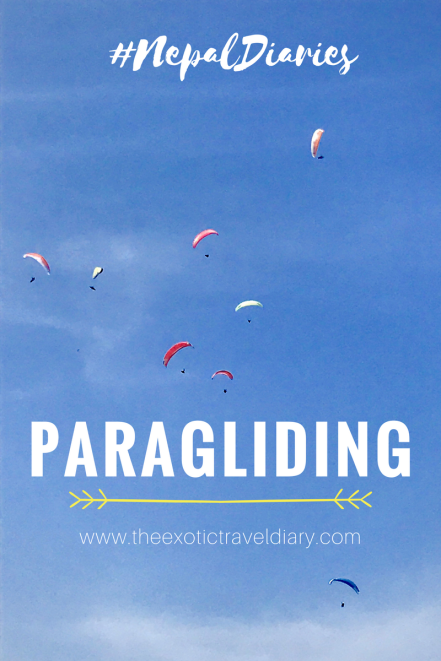 Pokhara is such a scenic city having hills and lakes (the famous Phewa Tal Lake), so the paragliding experience becomes magical on its own. Because Pokhara is so touristy, you would easily find paragliding tour operators everywhere you go. Most of them have offices at the Lakeside, so it’s very accessible and easy to book yourself a tour. We booked our adventure through Peace Himalayan Paragliding on recommendation of our hotel’s manager. They were awesome as they took care of everything from bookings, to transport, and all we had to do was show up at our hotel lobby from where they took us to their office first (located on the Middlepath Street). We filled up some paper-work and made half the payment and after a while we were in the jeep on our way to Sarangkot!

All of these exotic adventures like zipflying and paragliding originate from Sarangkot which is a hilly/mountainous area almost a 30-40 minute drive away from the Lakeside. The ride to Sarangkot is extremely rough, so I believe only a 4 wheeler can do the honours. However, we saw people going uphill on their bikes and usual cars as well. Once you reach at a certain height, you already start to see several paragliders in the sky and it’s quite a view! 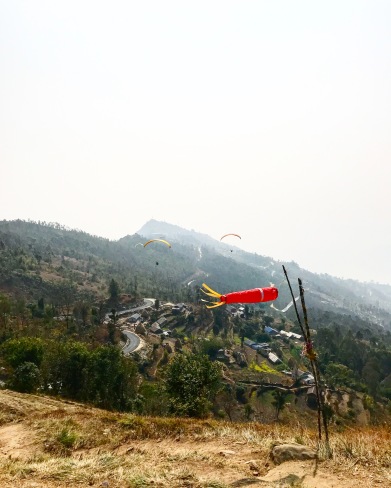 The cliff from where we jumped!

Once we arrived, we walked a little further to arrive at a cliff/slope sort of land where our tandem pilots got to work setting up the parachute. Once that beauty was all pumped up, he called our names and strapped us in with him. 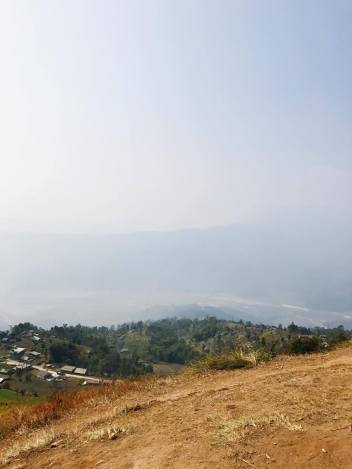 I’d like to make it clear over here what the tandem experience is really like. Basically there is a parachute which has a two seats attached to it. You take the front one, and your pilot takes the back one. For take-off, you are told to take the lead and walk. As you start walking, the parachute starts to rise up in the air and that’s when the pilot gives you the cue to run. And when you start running, the parachute is already up in the air and you can feel yourself being lifted up. From there onwards the parachute and your pilot handle the rest. Because you are running on a downward incline, the whole thing gets easier, the parachute lifts you up and before you know you are up in the air. The hardest part is to take those first few steps because there’s a huge weight of the parachute attached to your shoulders which makes it hard for you to balance yourself. Also, if you’re on the chubby side, things get a little challenging for your pilot, so you have to cooperate in the take-off. 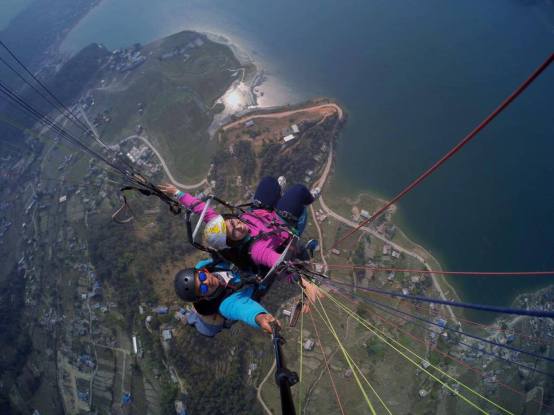 On the other hand, if some of you are concerned if it’s awkward to fly with a total stranger, I’d like to clarify that there are two separate seats attached to the parachute so there is absolutely no human contact. The experience is amazing, the views are drop-dead gorgeous, and it really is a different feeling looking at the world from so high up.

How long you will be up paragliding depends on the package you book. More money, more time in the sky.  Halfway up, the pilots tend to do some crazy acrobats in the air, which is all sorts of fun. Because I get nauseous very easily, I requested my pilot to not do these acrobats with me or he could expect the lake below us to receive blessings of puke from far above :p 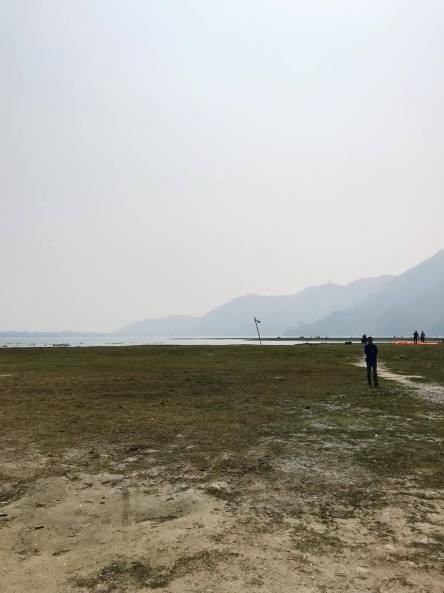 The landing site beside the lake.

In the end, you glide over the lake for a while and then land right beside it. The landing is extremely smooth, totally unlike the take-off where I had trouble balancing myself. Once you land, there are food and beverages stalls set up by the locals from where you can grab a snack or hydrate yourself. 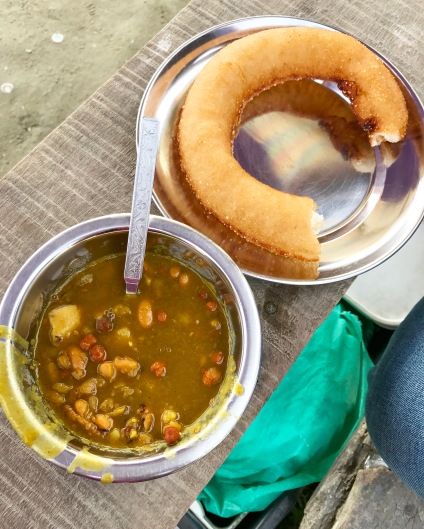 We had this delicious plate of Sel Roti and Vegetable curry as soon as we landed (Ok, maybe a few minutes after I got rid of my nausea). This particular plate was the highlight of my trip for it was so yummy, nutritious and made locally with lots of love. Sel Roti is a traditional Nepali delicacy. The roti or bread is made with rice flour and the curry is a delicious mix of potatoes, beans and lentils. A wholesome meal and finger lickin’ good honestly. If you really want to connect with a place and its people, you must try their basic, unlavish, staple food. You won’t find this in high-end cafes or restaurants, rather on the streets from local vendors and sellers. Indeed, the best food is street food. Something that struck a string in my heart when we bought this plate was what the woman who was selling this said to us: “Agar mazay ka samhaj ke khain ge tou mazay ka hi lagega.” (If you eat food with the intention of it being delicious then you will find it delicious) She was right. Food is for the soul, food should be eaten with a certain attention and mindset, giving it the respect that it truly deserves. Food is not something that should be eaten in front of the TV halfheartedly. Rather, it is something to be rejoiced and cherished with each and every bite. ❤️

Soon afterwards, we were dropped off at the Paragliding office at the lakeside where we made the rest of our payment and received our photos and videos. I absolutely loved the whole experience. Zipflying was great for a super strong adrenaline rush, but paragliding was something else really. If I have to compare the two, I can’t because each activity has its own charm. However, I personally enjoyed Paragliding more as I got to witness so many magical aerial views of Pokhara! You certainly feel like you’re watching over this beautiful Earth from the heavens. You realize how beautiful and serene God has made this Earth for us. It’s a humbling experience in my opinion to realize how tiny and mundane our usual routines are as compared to the wonders that exist on our planet 🙂

As usual some tips before you go:

+ The header image is a random paragliding picture I found online. Sorry, I didn’t take my camera along for this tour so couldn’t capture those aerial views 😦 The photos I got from the pilot’s GoPro are way too ugly for public release 🙂

+ All other images are my own. Shot by my phone. 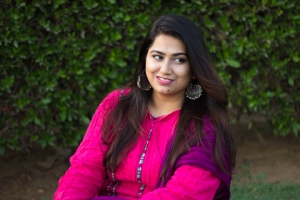 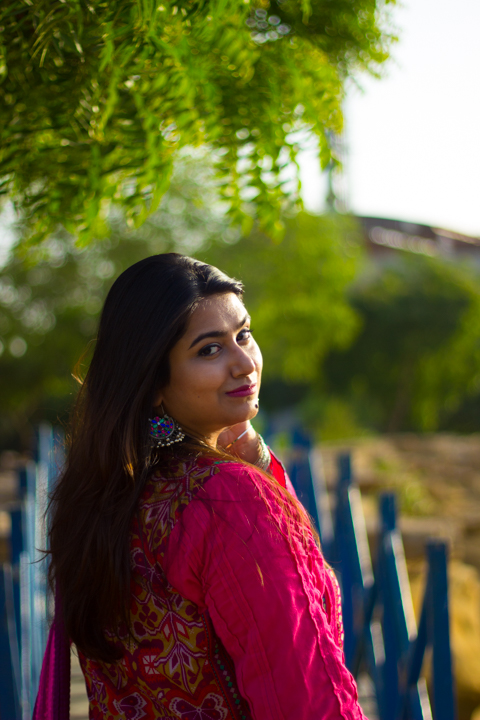